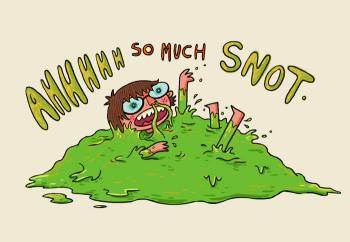 It’s that time of year when it seems like everywhere you look, someone is sick! Sometimes, despite your best efforts, you get sick with a sinus infection- definitely not fun. Read on to find out a common condition we see in Urgent Care… SINUSITIS.

Acute sinusitis is the most common type of sinusitis. It is usually caused by a virus like the common cold, and is often called viral sinusitis. An acute sinusitis caused by a bacteria is called bacterial sinusitis. Both types of sinusitis have similar symptoms, including nasal congestion, nasal discharge, facial/sinus pain, ear pressure, headache, and fatigue. The way you tell the difference is not what color snot comes out of your nose, but rather by how long you have been sick. Sinus infections most often start with a viral infection or an allergic reaction that causes inflammation and mucus build-up in the sinuses. When the mucus build-up lasts longer than a few weeks, the bacteria that are normally in the nose and mouth get into the sinuses and start a secondary bacterial infection.

What can you do to help the symptoms of acute sinusitis? For pain control, you can use warm compresses and over the counter Advil (ibuprofen) or Tylenol (acetaminophen). To open the sinus passageways and help with stuffiness you can try oral decongestants (such as Sudafed). To help with the swelling in the sinuses, you can use nasal steroids (such as Flonase) and saline rinses (such as with a Neti pot). Using saline irrigation has been proven to decrease pain associated with congestion and shorten the length of time you have symptoms.

We are happy to evaluate you in the office to help you determine the best treatment when you are sick. Our hours are Monday through Friday, 8am to 6pm.