An Update on Measles 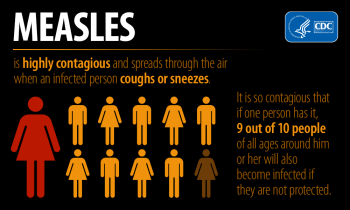 Although no cases have been seen in Vermont this year, Montreal has had a recent  outbreak of measles. In addition, all the states bordering Vermont, including New Hampshire, New York and Massachusetts, have had outbreaks this year. Measles is one of the most contagious of all diseases, and Vermonters need to be aware :

The measles virus stays in the air for up to two hours after an infected person leaves an area. Someone with measles can pass it to others from four days before the rash appears to four days after the rash appears. Before someone even knows they’re sick, they can spread measles to other people.The incubation period for measles is six to 21 days.

The first symptoms can include:

After the first symptoms, many people have:

About nine in ten people with close contact to a person with measles will get the disease if they are not vaccinated.

Measles is preventable when people get vaccinated. Keeping measles immunization levels high in our communities is critical to preventing measles outbreaks. Measles is still common in many other countries and may be brought into the United States by unvaccinated travelers.

You are protected from measles if any of the following apply:

If you got the measles vaccine sometime between 1963-1967, you may have gotten an early version of the vaccine that was not effective. This early version was made from an inactivated virus. Check with your doctor about being revaccinated with at least one dose of MMR.

If you were vaccinated with an unknown type of measles vaccine or you cannot provide documentation of vaccination, check with your doctor about being vaccinated with at least one dose of MMR.

Measles is a serious disease that can lead to hospitalization and even death. Measles is deadly in one or two out of 1,000 children who become infected. Measles is especially severe in people with weak immune systems. Many people with measles have complications like: Diarrhea, Ear infections, Pneumonia, Acute encephalitis, or a brain infection that can lead to permanent brain damage.  In rare cases, a fatal disease that develops seven to 10 years after measles infection, called subacute sclerosing panencephalitis.  Getting measles during pregnancy increases the risk of premature labor, miscarriage and low birth weight infants.