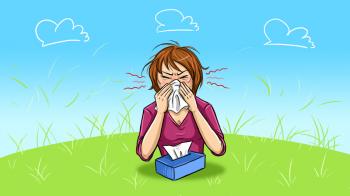 Spring pollen counts are once again high and CMUC is seeing a lot of patients with allergic rhinitis. "Rhinitis" refers to inflammation of the nasal passages. This inflammation can cause a variety of annoying symptoms, including sneezing, itching, nasal congestion, runny nose, and postnasal drip (the sensation that mucus is draining from the sinuses down the back of the throat).

Allergic rhinitis is caused by a nasal reaction to small airborne particles called allergens (substances that provoke an allergic reaction). In some people, these particles also cause reactions in the lungs (asthma) and eyes (allergic conjunctivitis). The allergic reaction results from activation of two types of inflammatory cells in the body called mast cells and basophils. These cells produce natural chemicals, such as histamine, which cause symptoms, such as nasal congestion, itching, sneezing, and a runny nose.

The symptoms of allergic rhinitis vary from person to person. Although the term "rhinitis" refers only to the nasal symptoms, many people also have symptoms that affect the eyes, throat, and ears. Sleep may be disrupted as well. Symptoms may include the following:

●Eyes – Itchy red eyes, a feeling of grittiness in the eyes, swelling and dark discoloration of the skin below the eyes (called "allergic shiners

●Throat and ears – Sore throat, hoarse voice, congestion or popping of the ears, itching of the throat or ears

●Recalling where you were and what you were doing before your symptoms started (for example, spending time outside or around animals)

●Noting the time of year during which you have noticed symptoms

●Looking closely at the home, work, and school environments for potential allergens

The treatment of allergic rhinitis includes reducing exposure to allergens and other triggers in combination with medication therapy. In most people, this combined approach can effectively control symptoms.

Avoiding the trigger(s) — Sometimes people can treat their allergic rhinitis simply by avoiding the things that trigger symptoms. For example, sleeping with the windows shut can help for pollen allergies as pollen counts are always highest between midnight and noon.

Glucocorticoid nasal sprays — Nasal glucocorticoids (steroids) delivered by a nasal spray are the first-line treatment for the symptoms of allergic rhinitis. These drugs have few side effects and dramatically relieve symptoms in most people. Studies have shown that nasal steroids are more effective than oral antihistamines for symptom relief because the prevent the release of histamine from mast cells and basal cells, thereby preventing the symptoms.

Many nasal steroids are available over-the-counter in the United States (sample brand names: Flonase Sensimist, Flonase Allergy Relief, Rhinocort Allergy), all are similarly effective for treating all of the symptoms of allergic rhinitis.

Some people notice symptom relief on the first day of treatment with nasal steroids, although it may take days to weeks to notice the full effect. For this reason, nasal steroids are most effective when used regularly.

How to use a nasal spray — Nasal sprays work best when they are used properly and the medication remains in the nose rather than draining down the back of the throat. If your nose is crusted or contains mucus, you can clean it with a saline (salt water) nasal spray before using a nasal spray that contains medication.

Hold your head straight or with your chin slightly tucked. Point the spray away from the nasal septum (the cartilage that divides the two sides of the nose) aiming towards your ear. After spraying, sniff gently to pull it into the higher parts of your nose. Avoid sniffing too hard, as this can result in the medicine draining down your throat.

Some people wonder about the side effects of steroids. It is true that steroids taken in other forms (ie, as a pill or inhaled into the lungs) can have side effects, especially when taken for long periods of time. However, the doses used in nasal steroids are low and are not associated with these side effects.

Antihistamines — Antihistamines relieve the itching, sneezing, and runny nose of allergic rhinitis, but they do not relieve nasal congestion. Using them along with nasal steroids or decongestants may provide greater symptom relief than using one of these medications alone.

Decongestants —  If you have severe symptoms, you may need to use a nasal decongestant for a few days before starting a nasal steroid to reduce nasal swelling. This allows the nasal spray to reach more areas within your nasal passages.  Sample brand name of Sudafed tablet, 30mg dose are quite effective for 6 to 8 hours.  Check with your provider before using if you have a heart condition, and do not take at all if pregnant Decongestants in the form of nasal sprays are not recommended for treating allergic rhinitis.  Nasal decongestant sprays should not be used for more than two to three days at a time, because they may cause a type of rhinitis called "rhinitis medicamentosa," which causes the nose to be congested constantly unless the medication is used repeatedly. This condition can be very difficult to treat.

Cromolyn — Cromolyn (brand name: NasalCrom) prevents the symptoms of allergic rhinitis by interfering with the ability of allergy cells to release natural chemicals that cause inflammation. It is available as an over-the-counter nasal spray. Cromolyn must be used several times per day to effectively prevent the symptoms of seasonal allergic rhinitis. It works better if you use it before symptoms begin. It is generally not as effective as other treatments but may be a good option for temporary situations, for example, if you are visiting a friend or relative with pets that trigger your allergy symptoms.

Nasal irrigation and saline sprays — Rinsing the nose with a saline (salt water) solution is called "nasal irrigation" or "nasal lavage." Saline is also available in a standard nasal spray, although this is not as effective as using larger amounts of water in an irrigation.

Nasal irrigation is particularly useful for treating postnasal drip, sneezing, nasal dryness, and congestion. The treatment helps by rinsing out allergens and irritants from the nose. Saline rinses also clean the nasal lining. You can use it before applying a spray-containing medication to get a better effect from the medication.